１．Purposes of the NCS Rating

(1) The organizer must submit a rating report to NCS after a tournament or meeting. For FIDE official events, the organizer must submit, in addition to a rating report mentioned above, a prescribed TXT file to NCS
(2) The club representative or an NCS member approved by the representative shall submit a rating report.
(3) Rating calculation period starts on the 21st of each month and ends on the 20th of the following month. NCS calculates ratings for each calculation period and publishes new ratings on the first day of two subsequent months after the month in which ratings calculation period started. (i.e. NCS calculates ratings incorporating game results from January 21 to February 20 and publishes new ratings on March 1 as rating for March.)

(4) Rating renewal fees to be paid by a person who submits a rating report are JPY200 per player. For meetings organized on a periodic basis, there is no need to pay the rating renewal fees twice for the same player. (i.e. If Player A and B participates in weekly tournaments hosted by Club C, the fees are JPY 400 for two players regardless of the number of weeks they have participated.)

(1) A rating report shall include a, b and c below. Whenever possible, use of Swiss Manager or reporting files provided by NCS is encouraged.
a. Name of a tournament, date/time, venue, name of the person in charge of the tournament, type of tournament (standard or rapid)
b. NCS ID number and name in the Roman alphabet
c. Game results (white romanized name, result, black romanized name)
(2) If Swiss Manager is used, uploading to Chess-Results.com and notifying NCS of the upload can replace a rating report mentioned in the preceding paragraph.
(3) Player’s names are spelled in the Roman alphabet in the same way as FIDE does: family-name first-name order and without a comma in between.
(4) A rating report shall be sent by email to japanchess.rating@gmail.com.
(5) If it was a player’s first official tournament or a player without ID, the player’s name in Kanji, date of birth, email address (any other available information) should be included.
(6) In a standard game, each player has at least 60 minutes, based on 60 moves. However, if it is not a FIDE official tournament, a game of at least 45 minutes can be deemed to be a standard game.
(7) A rating report for the regional qualifying tournament for Japan Chess Championship should include the names of qualified players.

(1) For K values, age on January 1 shall be used to determine K for the subsequent year.
(2) C is the change and is calculated per game by formula: C = (R – PD) * K
⦁ R is the result and a win gives 1 point, a draw 0.5 points and a loss 0 points.
⦁ K is the development coefficient. The larger K is, the greater variation in a rating. The K for standard and for rapid are deemed different. Normally, the K is 20. For an unrated player (UR) whose cumulative number of games is below 18, or a player who is aged below 18 and has rating below 2300, the K is 40. For a player who has ever achieved a rating of 2400 or more, the K is 10.
⦁ PD means the scoring probability and it is given from H or L shown in the table below depending on each other’s rating difference. (see Table 1 below)
⦁ For example, Player A (Rating: 1600) and Player B (Rating: 1800), both of whom have the K=20, played a game. Since the rating difference is 200, the H is 0.76 and the L is 0.24 as shown in Table
(2) All the C values during one rating calculation period are added up and the total value is rounded to the nearest whole number. The new rating is calculated by adding this total and the current rating value.
(3) Unplayed games and games between UR players are counted as zero and not calculated in the rating.
(4) If the rating difference is 400 or above, it is always calculated as 400.
(5) The lowest NCS rating is 400.

(1) Players who do not have either an NCS Standard or an NCS Rapid rating will take over the rating they already have.
(2) Players whose rating cannot be determined with (1) above will take over the FIDE rating in the following orders:
①FIDE Standard, ②FIDE Rapid, ③FIDEBlitz.
(3) Players whose rating cannot be determined with (1) and (2) above are called unrated players (UR) and their ratings are zero. The initial rating is calculated when a UR player whose cumulative number of games becomes 4 or more. The K is 40 for the first 18 games. This rating shall not be used for qualification examinations.
(4) The initial rating for a UR player will be derived by FIDE calculator.In this calculation, even if the opponent is a UR, its rating is assumed to be 1000. 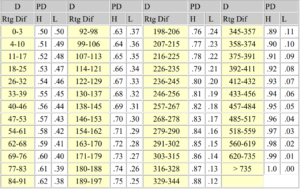 From FIDE Rating Regulations
Reference
🡪 please refer to 4(5) above)
Note: This English version is for reference purposes only. The Japanese version of this rule shall prevail.